DeGoler’s, an independent pharmacy that has served Wyandotte County for about 90 years, was sold recently to CVS. The company can trace its roots to 1928 when Pharmacist Harvey DeGoler founded the company. 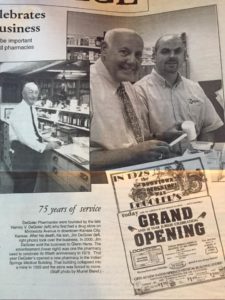 This 2003 feature covered the 75th anniversary of DeGoler’s Pharmacies in Kansas City, Kansas. DeGoler’s, which was recently sold, was 90 years old this year.

His son Jim, also a pharmacist, explained that his father’s drug store was at 552 Minnesota Ave., near the intersection where passengers got on and off the street car. The store was also a meeting place for business and political leaders. One of the regulars who could be found there was Lacy Haynes, the longtime bureau chief for the The Kansas City Star. He was also a legendary political kingmaker.

Jim was a business and civic leader serving as chairman of the Chamber of Commerce and the Board of Trustees of Bethany Medical Center. He was also president of the Kansas City, Kansas, School Board.

One of the issues facing independent pharmacies is the fees from preferred network drug plans offered by insurers and pharmacy benefit managers. Direct and indirect fees have been rising in

these popular plans according to a recent article in The Wall Street Journal. The article told of surcharges that come along after the patients have received and paid for prescriptions. Pharmacies must eat these surcharges.

Murrel Bland is the former editor of The Wyandotte West and The Piper Press. He is executive director of Business West.